4 NIGHTS IN THE KINGDOM OF ESWATINI

Eswatini is rated as one of the best places in the world to see both black and white rhinos in the wild. Here you have a real chance to see the rhinos in their natural habitat. You can choose to view them on foot, from a vehicle or a combination of the two. Both are different ­– and wonderful ­– experiences.

Rhinos are under threat everywhere and it is becoming more and more difficult to see these incredible beasts in the wild. Only a few countries have managed to protect their rhinos during the last surge in rhino poaching and one of them is Eswatini.

This adventure is hosted by Marie Dahl, a biologist and wildlife guide who lives permanently in Eswatini. 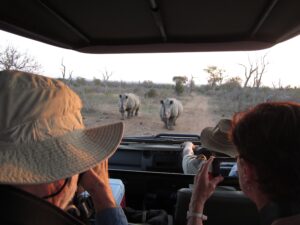